Donning high heels, the men and women of Harcourts walked at six locations across Australia on Friday 31 August. Seeking to bring attention to the tragedy that is violence against women, The Harcourts Foundation organised over 500 Harcourts staff, family, friends and supporters and raised $100,000 to support White Ribbon’s “Breaking the Silence” prevention initiatives in primary and secondary schools.

Since its inception six years ago, the Harcourts event ‘Walk A Mile in Their Shoes’ has raised over $500,000.

“We are beyond grateful to the Harcourts men who courageously addressed the complex and sensitive issue of domestic violence by standing as one team united against violence,” said Julia Eyles, The Harcourts Foundation coordinator.

“We walk together to help White Ribbon create a future where all women will live in safety.” 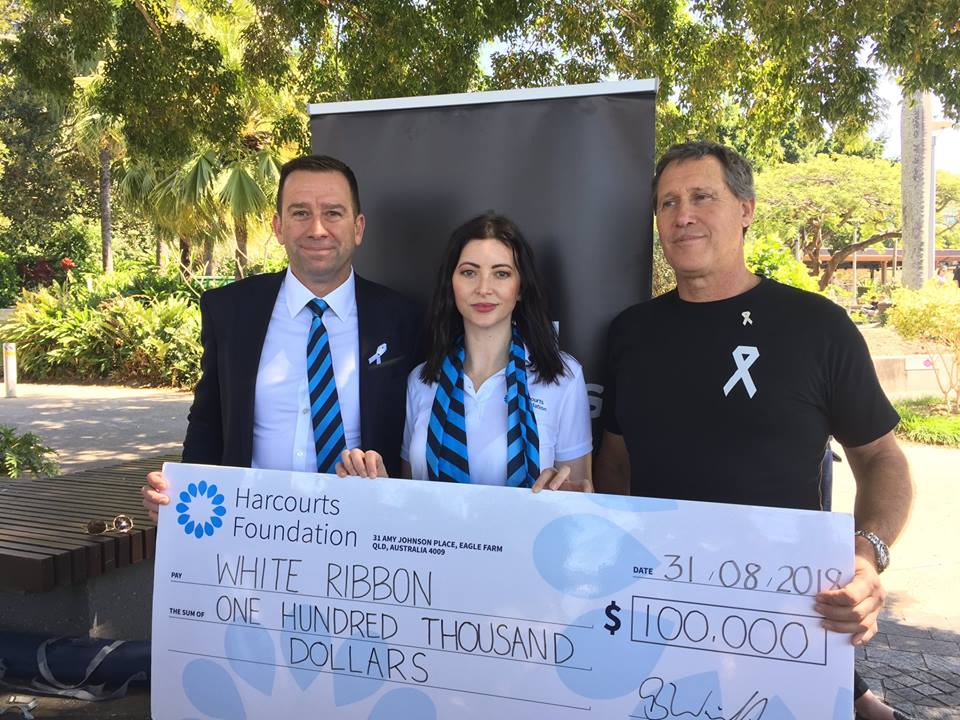 In front of almost 100 Harcourts supporters and those that gathered along the busy Brisbane Southbank promenade, Harcourts Queensland CEO Brendan Whipps presented White Ribbon Ambassador Tim Class-Auliff with a cheque for $100,000, symbolic of the collective funds raised collectively. (photo above)

Mr Class-Auliff spoke to the gathered crowd along Southbank Brisbane of his sister-in-law who life was unfairly cut short by her partner.

“One woman loses their life to domestic violence each week in Australia,” he said. “Today we walked for every one of those women.”

Harcourts Victoria CEO Sadhana Smiles backed the concept of Walk a Mile, holding the first walk in Melbourne, in 2013. Since then it has expanded to a national audience across the Australian real estate franchise network of 430 offices.

In Sydney’s west, the Campbelltown Walk a Mile event also held the distinction of hosting the nation’s top fundraising team from Harcourts The Property People. Headed by business owners Garth and Laura Makowski, the team has raised, to date, over $16,000. (photo below)

“Involvement is voluntary within our business, staff take time outside their work commitments to contribute and to make this event a success. We have so many team champions this year,” said Garth Makowski.

“We are especially grateful to all of those within our community who have supported us in our efforts this year. Thank you to our sponsors, and for your donations, for you words of support and encouragement for they’ve kept us focussed and determined to make a difference. We are very lucky to live and work within a very giving, generous and selfless community.”

“Women across Australia need to see men step up, speak out and act to let it be known that violence against woman is never acceptable,” said Ms Eyles. “At Harcourts we want to make a difference.”

Walk A Mile in Their Shoes is in its 6th year and has collectively raised over $500,000 for White Ribbon. The Harcourts Foundation is unique in that it is volunteer-run, with all costs borne by Harcourts, meaning that 100% of all money raised goes directly to recipients.

If you are experiencing violence or suspect someone else is, please contact 1800 RESPECT for advice and support. In an emergency, call the police on 000.